Recently, I had been reading Jim Collins' Good to Great, which is an easy-to-read book based on a five-year scientific project. While it is logically seen before Built to Last, it is interesting to see that the study was done subsequently. Also as an investor, it is certainly always important to be able to recognize a great company (and to be able to assess whether it will remain so). However, it is much more exciting (and in case of success certainly more profitable) to invest in a company that is developing from a good company into a great one.

One of the most handy facts about the study is the fact that the whole result can be expressed in one framework: The Flywheel. Jim Collins and his team found that every studied company, that made the leap followed the processes described below: 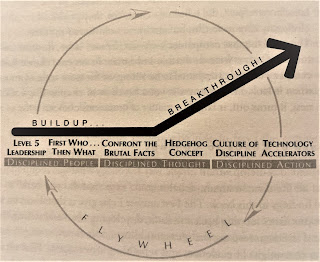 Overall, the book is an easy and interesting read. Nothing of it remembers of a boring scientific study. Yet, the reader finds herself as part of the research team and can truly comprehend the developments toward the just presented flywheel. Although the book was published in the early 2000s, it has not lost any of its importance today. Certainly, I will try to implement the Flywheel process within my investment research process. Especially when attempting to evaluate management (and their bold visions), the concept should be a very helpful tool. I recommend the book to anyone who wants to understand the exciting underlying factors of highly successful corporate transformations.